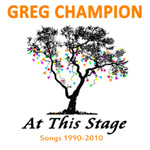 Celebrating twenty-one years since the release of Greg’s first solo album in 1990 and about ten albums later, Champs released a Best Of  in 2002 which spanned those years. Almost a decade later – and around seven albums further on – Champs Inc Global released At This Stage, a twin CD Best Of collection. Coupled with the original 2002 collection, the past ten years now gives us the chance to pause and present a companion CD of some of Greg Champion’s best work in that period.

Visit the store to purchase this album.